How Medieval Empires is solving these issues?

Medieval Empires is an elaborate, multi-player online strategy game that is set in the Levant region in the late 13th century. The storyline of the game focuses on Ertuğrul Gazi, a tribal warrior and a celebrated leader of the Kayi tribe.

Medieval Empires is being built on the Polygon blockchain as it provides several great features, including player reach, developer ecosystem, low gas fees, security, and speed. In addition to that, it is also eco-friendly, as compared to Ethereum and Bitcoin. The game will be available on PC (Windows), MAC (OSX), and Mobile (iOS and Android), with all platforms being fully interoperable.

In the game, Ertuğrul Gazi, played by Engin Altan Düzyatan, will face off against the future King Edward 1st aka Edward Longshanks aka Hammer of the Scots, who is expanding a successful 9th Crusade across Europe to the Holy Land.

The game is set in a passive PvE area and starts with players building towns through trading, fighting, and forging alliances. Goals for players include daily missions, general tasks, and story missions, with progression based on the successful completion of these tasks and missions.

The future of the game will bring in new leaders and regions for the players to explore and progress in. In addition to the Longshanks Crusaders and Turkish Tribes, new factions will be integrated into the game in the near future, including the Mongols and many more.

How Medieval Empires is solving these issues?

What makes the project unique?

From release onwards and over time, the world map will continue to expand. New lands will be added, reaching from Europe and Africa, via Middle East all the way to Asia.

Heroes are a fundamental part of the game: during the continues development of Medieval Empires, more and more system, like gear, will be added to the depth of hero gameplay. By that, players have the chance to develop their unique heroes and lead them either into battle or sell them on market places.

While the Medieval Age isn‘t unique as such, focusing and highlighting on the Middle Eastern part and using the Turkic area as starting point, delivers a new angle and allows for a new historical setup and direction.

Next to PvE Land, the game will offer PvP and event counties. The individual interactions of the players, will define the use and development of such counties. Conquering them for the own faction, can ultimately lead to a shift of powers within that region.

Making use of the companies MEE Token, the player has the chance to stake them in game. That will allow to not only having the chance of participating in air drops but also receive game specific benefits, such as boosts.

Medieval Empires does not only allow to sell resources, to make up for land investments but also to rent out the land to other players. By that, the owner of land will have the possibility to generate a passive income, to make up for his/her investment.

This mechanic will allow for seamless game experience and cooperation between all players. Everyone on the map will see the same universe of Medieval Empires, without any cut into the user experience.

Medieval Empires will be shipped as desktop but also mobile version, with true cross-platform gameplay. The same account can be played, either sitting at home on the PC or while being on the way to work, sitting in the subway.

Trading marketplace for any kind of resource

Medieval Empires will provide an own marketplace to trade anything NFT, that comes out of the game – may it be land, heroes, resources and much more. The users could also trade their NFTs on other marketplaces, using the Polygon chain, if they wish to. 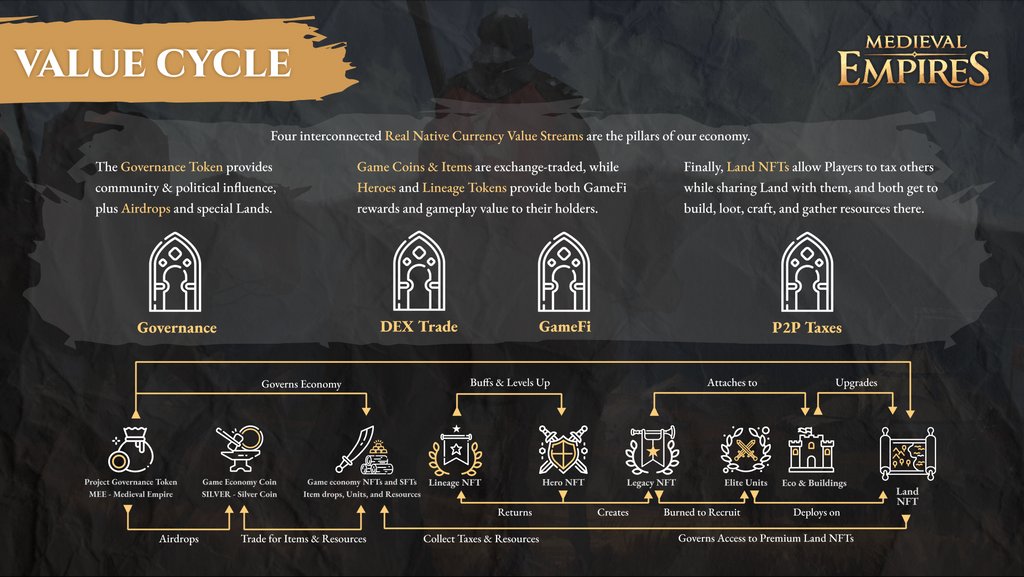 Revenue will be made through NFT and SFT sales (land, heroes, items) as well as the #MEE Token.

Additionally, we monetize by renting out land and securing royalties that evolve around the player economy by trading resources, units and land.

While our game’s combination of elements give us a unique position within the current market, strategy-crypto games in general can be considered ‘competitors’. 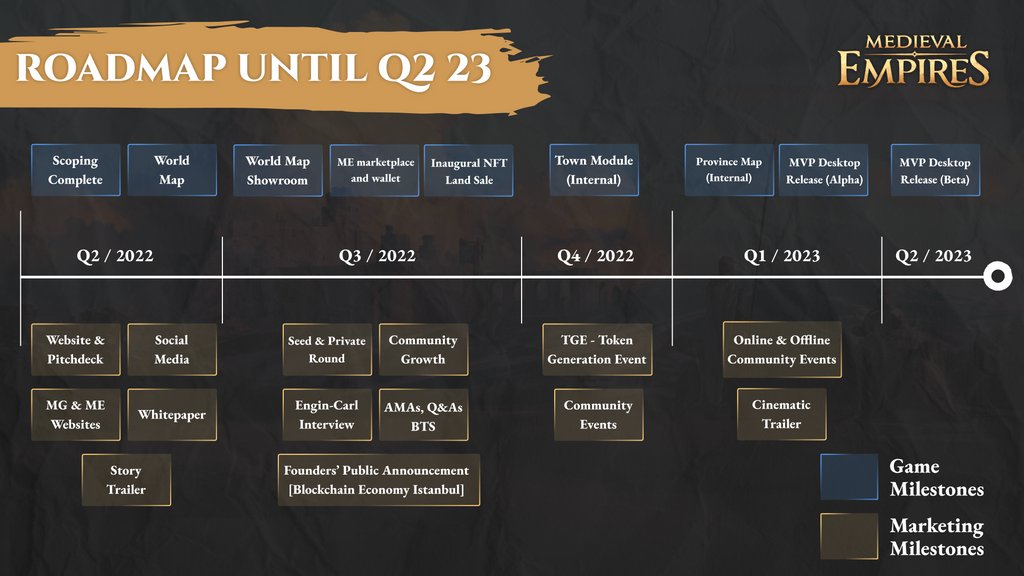 Our experienced team of almost 50 people has decades of work experience working on some of the biggest games and studios in the industry. Many of our core team come from gaming studios such as InnoGames, Wargaming, King, Kabam, 5thPlanet Games, Wooga and many others, or have worked directly on Star Wars & Disney productions.

We have Carl Runefelt aka TheMoon (one of the biggest crypto influencers) and Engin Altan Düzyatan (a big international actor) on board.